Skip to content
Course Content
Types of Computers
In Grades 10 and 11, you learned about different types of computers, such as the following:
0/3
Refresher – Grades 10 and 11
Computers and their Uses
What is a computer and how does it work?
Computer Applications Technology (CAT) – Grade 12
About Lesson

All computers, whether they are the smartphone in your hand or large, powerful servers, operate on the same five basic principles. These are input, processing, storage, output and communication.

Each component of a computer performs one of these functions, but they all work together to make the computer work. 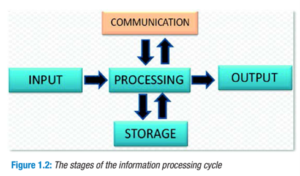 Let us look at each of these stages and how they work together. We will also look at how these processes can get one computer to communicate with users and other computers.

The five main steps are input, processing, storage, output and communication.
Input
In the input stage, the data is entered into the computer. There are many ways to do this. In fact, there are as many ways to input data as there are input devices. You would have learned about input devices in Grade 10 but just to refresh your memory, input devices are things such as keyboards, touchscreens and microphones. The user inputs the data (for example, by typing on a keyboard or speaking into a microphone) into the computer. The device takes this data and converts it into a series of 1s and 0s (this is called binary code).
Processing
The central processing unit (CPU) inside the computer then takes that binary code and does the calculations needed to get that data to display in a way that makes sense to the user.

There are many ways to store the data, but the basic process is as follows:

Output
Output is where the computer takes the pixels from the processing stage and displays them in a way that the user can see them. There are many kinds of output devices, such as printers, screens, video and audio devices. These devices make the raw data usable and visible, allowing human users to interpret the data, turning it into information. This could be the sound waves of a song or the letters in a document.

No Attachment Found
Previous
Next